Thousands of motor-driven cycles, the vast majority mopeds and scooters, have been registered with the Indiana Bureau of Motor Vehicles since a new law went into effect in January that placed more stringent requirements on riders of two-wheel vehicles.

Until now, no one knew how many of these units were actually on Indiana roads. Lawmakers put in place the new requirements so police can better enforce safety laws while also tracking accidents and injuries. 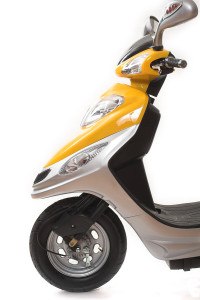 More than 17,000 two wheel vehicles were registered with the BMV through the end of June, The (Fort Wayne) Journal Gazette reported.

Now anyone operating a moped has to be at least 15 years old and it has to be registered with the BMV. The driver also has to receive an endorsement – but not a full license – by taking a 25-question test focusing mostly on signs and signals.

The law does not require insurance, though riders younger than 18 must wear a helmet. Passengers are also prohibited and the maximum legal speed is 35 mph.

Maze says scooters and mopeds are often on the losing end of traffic accidents – no matter who is at fault – because of their small size and weight.

“They are definitely a little more vulnerable to being pushed or thrown,” he said. “You get clipped by something, and you don’t have the stability of a heavier bike.”

Indiana State Police Sgt. Ron Galaviz said state troopers have seen 12 reported crashes this year involving “motor driven cycles” or “motorized bicycles,” with seven injuries and one death. Other fatalities among scooter drivers have been handled by other police agencies around the state.

“There are years where they have risen and years with a decline,” Foust said. “There was no rhyme or reason for that because there really was no change in the law until recently.”

He said the county has had three moped-related fatalities this year. In comparison, there were none in 2014, two in 2013 and none in 2012.

“There’s not a lot of data for the overall group yet,” Foust said. “That’s the biggest challenge because up to now, they have never been registered, so we don’t know how many there are.”