A central Indiana city is taking steps to reduce its liability from a popular winter activity.

Muncie’s parks department has placed bales of straw around trees at the bottom of a popular sledding hill in McCulloch Park. The department also is putting up signs that warn people to sled at their own risk.

“I want people to be able to continue sledding, but I want to cut down on risk,” parks superintendent Harvey Wright told The Star Press.

The moves come as communities around the country struggle to ease liability concerns surrounding the winter pastime. 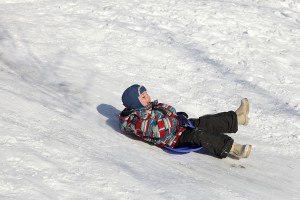 Dubuque, Iowa, has banned sledding in most of its 50 parks to protect the city from lawsuits. In Columbia City, Indiana, sledding is off limits on certain hills and signs warn people to sled at their own risk.

A study by the Columbus, Ohio-based Center for Injury Research and Policy at Nationwide Children’s Hospital found that between 1997 and 2007, more than 20,000 children were treated at emergency rooms for sledding-related injuries each year.

The city of Boone, Iowa, paid $12 million in 2011 to a sledder who hit a concrete cube at the bottom of a sledding hill. Lawsuits in the past decade have also resulted in a $2 million judgment against Omaha, Nebraska, after a 5-year-old girl was paralyzed when she hit a tree and a $2.75 million payment when a man in Sioux City, Iowa, slid into a sign and injured his spinal cord.

“People are getting hurt in other states,” Wright said. “We’re trying to keep that from happening here.”

Muncie is the latest Indiana city to take steps to protect itself from accidents caused by winter activities. Fort Wayne officials announced earlier this month that the city would no longer open its four ponds for skating during the winter because officials can’t monitor the sites to ensure the ice is thick enough to be safe.