It took only seconds.

Tim Hansen climbed inside the grain bin with a long pole, planning to shove it down into the corn to clear a crust of kernels stopping corn from funneling out to be loaded into trucks.

His grown son, Chris Hansen, stood outside the 60,000 bushel bin northeast of Dixon, Neb., with a two-way radio that let him talk to his 60-year-old dad. They knew going inside a bin could be dangerous and liked to keep in contact as a precaution.

Chris tried to radio his dad but got no response. He banged on the side of the bin, turned off the auger then climbed to the top.

“When I got to the top of the bin and looked in, his bar was sitting dead smack over the center of the hole where it should have been but there was no dad,” Chris said.

Chris jumped in and dug with his hands but couldn’t find his dad and business partner.

It took rescue workers more than two hours to find Tim Hansen’s body at the bottom of the bin under 10 feet of corn. Chris believes there was a void in the grain that collapsed, causing Tim to fall backward and sucking him under.

One to three people die in Nebraska each year from becoming entrapped in grain, the Lincoln Journal Star reported.

Nationally, this year is expected to be the deadliest for grain engulfment since 2010, which was the deadliest year on record, according to Bill Field, professor in the department of Agriculture and Biological Engineering at Purdue University in West Lafayette, Indiana. Purdue publishes an annual summary of grain-related entrapments and engulfment in the United States. 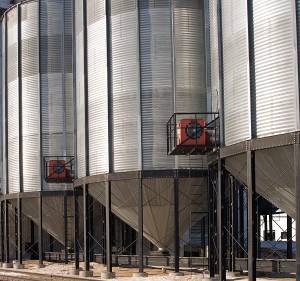 The number of incidents recorded this year surged passed last year’s total of 33 about midsummer, the final numbers will be released early next year, Field said.

Those are only the numbers researchers hear of, he said. The actual number likely is about 30 percent higher. About two-thirds of grain storage in the United States is on farms exempt from the OSHA reporting requirements. Often, when a person is rescued, people wipe the sweat off their brows and go home. The incident doesn’t make the news and researchers never hear of it.

In 2013, about 40 percent of recorded entrapments ended in death, a figure that has been steadily declining. From 1964 to 2008, 73 percent were fatal. Experts believe it’s due to a combination of factors, including safer confined-space entry procedures, more emphasis on first responder training and public awareness and greater willingness to report nonfatal cases.

Getting trapped in grain is far from the most common cause of death in the agricultural industry. Overturned tractors kill the most workers, an average of 125 lives in the United States each year, according to the National Institute for Occupational Safety and Health.

But grain bins, which claim only about one-tenth of the lives as tractors each year, stand out in the news just as they do on the horizon. The incidents make for gruesome tales: A farmhand goes into a bin to do some dull task and gets crushed under an avalanche of grain or gets sucked down as in quicksand. Bits of grain have been found in the lungs of victims.

Adding to the shock often is the young age of the victims. Farming is the only industry that employs children as young as middle school. About 20 percent of all documented entrapments involve people younger than 21, the Purdue survey says.

In Nebraska, 18-year-old Joseph Teague went into a grain bin in Lorenzo to shovel millet on May 7, 2007. He got caught in the flow of grain being emptied by an auger and was pulled under and suffocated.

OSHA cited the elevator owner, Crossroads Cooperative Association, for allowing the teen to go into the bin without supervision or without a proper harness while grain-moving equipment was running. Crossroads also was cited for failing to provide equipment for rescue operations. The initial federal fine was $130,050; after appeal the fine was reduced to $50,000.

This year, with the last few acres of corn being harvested across the Midwest, grain bins are full to bursting. The U.S. Department of Agriculture has predicted a record 14.4 billion bushels of corn will be harvested in the United States this fall. Low prices have many producers holding onto their grain in hopes of better prices later.

Despite the mountain of grain that will be in the bins, Field isn’t predicting a spike in engulfment incidents. It’s not the amount of grain harvested in a given year that increases the risk of suffocation deaths, he said, it’s the moisture level of the grain. Wetter corn tends to stick together and create crusts. That means more people crawling into bins to knock it loose.

The deadliest year on record was 2010 with 59 recorded grain entrapments following a wet 2009 harvest, according to the Purdue summary.

The Midwest Farmers Cooperative, which has 26 locations in southeast Nebraska, reports the majority of corn coming in this year at 15 percent moisture or less, which is about optimal for storage, according to Marketing Manager Austin Benes.

Midwest Farmers Co-op recently donated a six-piece tube for use in emergency extraction of people from grain to the Tecumseh Volunteer Fire Department for use in Johnson County and another tube to Cass County Emergency Management. The cooperative also has offered to open its facilities up to rescue workers to train how to save people from the crushing embrace of grain.

Grain handling facilities subject to OSHA regulations have to follow strict standards and have equipment like harnesses on hand to prevent workers from being trapped in grain. Most farms don’t have the same requirements, said Lee Paulsen, Midwest Farmers Cooperative safety and compliance manager.

Paulsen advised farm workers to stay out of grain bins if they can. But if they have to go in, he said to turn off the auger that moves the grain, have a buddy nearby and use a harness connected to a rope that can pull them out just in case they get sucked in.

Tim Hansen had been a local business owner, an emergency responder and former fire chief in addition to having farmed with his son for 15 years. He knew the dangers.

It took only one slip for a tragic result. Emergency responders, neighbors, family and friends dug by hand, with shovels and tore the bin apart with heavy equipment to get Tim Hansen out.

“I don’t want that to happen to any of my friends. If I see somebody crawling inside a bin now, I’ll stop and yell at them,” Chris Hansen said.