A campaign to remind people to stay off city train tracks appears to be paying off as the Chicago Transit Authority said reports of people trespassing on its tracks have dropped significantly in the last 12 months. 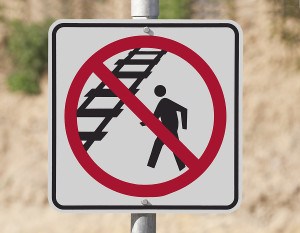 “We’re pleased to see the numbers declining, but unfortunately far too many customers are still making the dangerous and unfortunate decision to go onto the tracks,” CTA President Forrest Claypool said about the agency’s “Stay off the Tracks, It’s Not Worth Your Life” campaign. “We believe this campaign generated a lot of conversations about the important topic of safety…”

According to the CTA, in the last 12 months, there were 323 trespassing reports, compared to 388 the previous 12-month period, a drop of 16.8 percent. The release did not include the number of arrests, but officials acknowledged that because most people only stay on the tracks a short time there are few arrests.

The CTA pointed out the dangers of walking on the tracks extend beyond the risk of getting struck by a train. The agency said the third rail that propels the trains carries enough electricity to kill a person who touches it.

Customers who drop items onto the tracks should never jump on the tracks to retrieve them, but they should alert a CTA employee so trains can be slowed or stopped or power cut off to the third rail, officials said.