For decades, the federal agency that oversees workplace safety has been prohibited from regulating small farming operations. But lawmakers in South Dakota and other farm states have grown concerned that could be changing and are seeking to head off any effort to change decades of precedent.

In recent days, members of Congress from both parties have warned the Obama administration that only Congress can approve changes that would allow the Occupational Safety and Health Administration to inspect small farms. Senators and members of the U.S. House of Representatives have written to U.S. Labor Secretary Thomas Perez to express alarm at reports that some operations with less than 10 employees might be getting federal scrutiny.

Since 1976 Congress has banned OSHA from regulating small farm operations with 10 or fewer employees. But concerns have been growing among farm-state members of Congress since a 2011 memo asserted the agency can regulate “post-harvest activities” that include drying and storing crops. 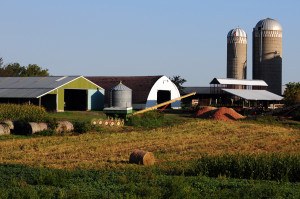 Sen. John Thune, R-S.D. and Rep. Kristi Noem, R-S.D. have both spoken out about the issue and signed on to letters to Perez. The House letter sent last week noted that small farm operations already deal with a bevy of regulations.

“Farmers and landowners have a strong vested and personal interest in keeping their operations safe and viable, and they are already subject to countless regulations to ensure operational integrity,” reads the letter signed by Noem and 83 other members of the House. “If the Administration believes OSHA should be given authority to regulate small farming operations, evidence would need to be presented to Congress and passed through the normal legislative process.”

The Senate’s letter to Perez, sent in late December, makes similar points. It says “OSHA is creating an artificial distinction in an apparent effort circumvent Congressional prohibition on regulating farms.”

The Senate letter prompted OSHA officials to try and clarify their intent.

Justin Barab, OSHA’s deputy administrator, said on a conference call that it’s never been the agency’s intent to target small farms for inspections or to ignore Congress’ intent. He said the agency was trying to address an increase in deaths related to grain storage and was working with the U.S. Department of Agriculture to make its intent clear to farmers and lawmakers alike.

OSHA’s assurances have not been enough for many lawmakers – the House sent its letter even after Barab’s comments. Local officials have also expressed misgivings.

Wayne Smith, the executive director of the South Dakota Farm Bureau, said he had heard from many small farm owners concerned about OSHA. He said he recognized that OSHA has said it would clarify the issue but said many farmers were still concerned about adding “one more layer of red tape to the operation of a farm.”

Smith said he was hopeful that OSHA would respond to criticism. And he noted that the issue that prompted the policy shift – grain bin safety – is something his organization has worked hard to educate farmers about. He noted that many of South Dakota’s farm operations fit the profile of a small farm and are run and operated by families.

“We just feel it will become a burden if it isn’t clarified,” he said. “We don’t want farmers to have to have a lawyer on a retainer and this would be just one more regulation.”