Less than two weeks after getting a new trampoline, 12-year-old Abbey Creamean broke her ankle when she landed awkwardly.

She wore a cast up to her mid-thigh. She had to cancel a dance recital, quit her softball team and give up swimming.

Abbey is among the more than 100 young patients that Dr. Terri Cappello of Loyola University Medical Center has treated during her 15 years as a pediatric orthopaedic surgeon. 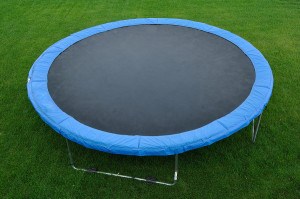 “A trampoline puts a child at risk for serious injuries,” Cappello said. “Kids sustain broken arms, legs and even break their necks which can lead to paralysis. Just as you would not let your child jump into a shallow swimming pool, you should not let them jump on a trampoline.”

Cappello agrees with a policy statement from the American Academy of Pediatrics (AAP) that says safety measures such as enclosure nets and padding have not substantially reduced the risk. “Therefore, the home use of trampolines is strongly discouraged,” the Academy statement said.

The AAP estimated that in 2009, there were nearly 98,000 trampoline-related injuries in the United States. And injuries peak during the summer months.

Cappello said trampolines might be worth the risk only when used for training purposes by gymnasts and divers, under careful supervision.

The Pediatric Orthopaedic Society of North America said trampolines and moon bouncers are among the four main areas of preventable injuries in children. (The other areas are skateboards, ATVs and lawnmowers.)

Cappello said injuries typically occur when trampoline users land awkwardly. Common injuries include a broken ankle or a fracture of the tibia (shinbone) just below the knee. Users also can break their necks and become paralyzed.

Abbey was doing a forward flip when her foot grazed the enclosure net. She landed wrong and broke her right ankle.

Abbey had begged for years to get a trampoline. But now her mother says they are getting rid of it, and Abbey isn’t objecting.

“She doesn’t want it anymore,” said her mother, Renee Creamean. “She’s afraid of it now.”