When University City’s new fire house No. 1 opens later this summer, it’ll be missing an icon of firefighter tradition.

“`We won’t have a fire pole,” said Chief Adam Long. “We’re just going to use the steps.”

At first, the change was hard for the 34-year veteran to accept because of sentimental reasons, he said. But after shopping around, he realized the apparatus – which runs about $20,000 – just didn’t fit in the $3.1 million budget.

“It’s a big cost, and we’re trying to come in under budget, so we elected to just eliminate the pole,” he said.

Long’s department is not alone. A survey of area fire departments and districts revealed that about half of the new fire stations being built or recently opened don’t have a pole, The St. Louis Post-Dispatch reports. 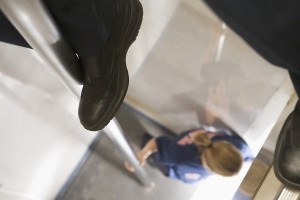 For fire districts like Pattonville in Bridgeton, the change was a safety and response consideration. Chief Terry Loehrer said he’s seen firefighters suffer numerous injuries on the poles, including sprains and a broken ankle. Partly because of that, the districts’ two new stations were designed with the bunk rooms on the first floor and the workout area on the second, negating the need for a fire pole.

“I think we all came to understand that safety issues ought to come first, but the secondary benefit is with firefighters already being on the ground floor, they’re probably about 20 steps closer to the fire apparatus,” he said.

For other departments, like St. Charles, having the space to build a new facility in one story made the decision easy. Two of the department’s five stations still have the poles, and while no serious injuries have happened on them, a single-story house takes away that possibility, officials said.

Fire poles have been used for about 135 years. Before that, fire houses used spiral staircases, which weren’t the quickest way down, but they kept the horses from trying to climb into the living quarters, said St. Louis Fire Department historian Bob Pauly.

The first fire pole was installed in Chicago in 1878 and was crafted of wood. As legend goes, the fire company was the butt of jokes until someone realized they were always the first to show up, Pauly said.

St. Louis got its first fire pole that same year. All but four of the city fire houses have poles today; the stations that don’t are one story.

Arthur Anthony, owner of McIntire Brass Works in Somerville, Mass., said 95 percent of fire poles are now made of brass, with the remaining 5 percent stainless steel.

His company’s sole purpose is to make fire poles, and he said its most popular model has about a five-month wait.

He said despite safety concerns about the poles, he believes they are safer now because of the design as well as better training of firefighters.

“In the old days there were a lot of adult beverages involved at the fire houses, and they played pranks on the rookies by greasing the poles,” he said. “It isn’t that way anymore.”

He said that the poles aren’t what’s dangerous anyway; it’s the landings. New poles come with a rubber mat that negates a lot of the problems, he said.

In addition, poles are no longer just placed in a hole in the floor. They come with guards and self-closing gates to prevent accidental falls and keep diesel fuel fumes out of the sleeping quarters.

While Anthony and several area fire chiefs contend that response times are much faster with a pole, no data supporting that exists with national groups like the National Fire Protection Administration.

Frontenac Fire Chief Jack Trout said his department didn’t have a fire pole until it opened its new station about 2 1/2 years ago. Before that, the station was one story, but now it shares space with the police department and city hall.

“Our pole drops right between our ambulance and our pumper, so literally, they slide the pole and depending on what apparatus they’re on, they’re only a couple of steps away,” he said. “It’s worked out well for us.”

Trout pointed out that stairs can be just as hazardous as far as injuries – especially during calls in the middle of the night, a sentiment that was echoed by other departments with poles.

Berkeley Fire Chief Henry Williams said he thinks a pole is safer than the stairs, and his department never considered anything but a pole when it built its new fire house two years ago.

“We had a two-story building, and the one before it had a pole, so we just stayed with tradition,” he said.

In University City, Long said when plans for a pole didn’t pan out, they looked into installing a slide, something that is gaining popularity around the country but hasn’t caught on locally.

But that too proved to be too expensive.

Long said his disappointment is alleviated somewhat in knowing that even if they were getting a pole, some firefighters would prefer to use the stairs instead.

“When I was a battalion chief and I was downtown, I opted to use the steps,” he said. “To me it was just as quick.”