Southern Indiana residents who are considering rebuilding after devastating March 2 tornadoes may make a decision not based on the destruction above ground, but on what lies beneath it. 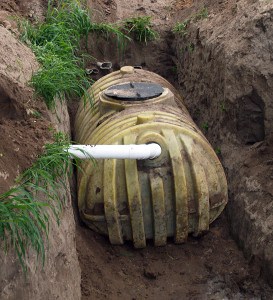 State law and county regulations require those who need building permits to get the health department’s approval for their septic systems. The Clark County Health Department has received four requests so far from Marysville residents who asked to have their septic-tank systems inspected so they can start rebuilding. It has granted two of them and says each request will be decided on a case-by-case basis.

Officials say they are concerned about how effective regular septic tanks will be. Even before the tornadoes, some residents had difficulty gaining approval because conventional septic system technology often doesn’t work in the area, the Courier-Journal in Louisville, Ky., reported. The area has poor soil and a high water table, which can prevent effluent from being filtered from septic systems.

Mound systems, in which additional soil and other materials are installed to act as septic-system filters, can sometimes help, said J.R. Righthouse, a fourth-generation resident of Marysville and owner of the village’s hardware store. But such systems are costly, running up to $18,000, and can require a large lot, he said.

Even those who get approval will be required to have a follow-up inspection in about 90 days to ensure their septic tanks are working properly, he said.

Though the Federal Emergency Management Agency can help with the cost of septic-tank installation for damaged homes, Clark County leaders are looking at other solutions. County Commissioner Les Young said the panel wants to find out what emergency funding is available for a community sanitation system.

If it can be financed and connected with a treatment plant in Charlestown or another nearby community, such a system could eliminate concerns about septic tanks, Young said.

About two dozen homes in Marysville were either destroyed or will require major repairs. Helen Pettit, a 52-year resident of Marysville, said several neighbors don’t plan to rebuild in town. Some, she said, have cited concerns about the costs and difficulties of replacing septic systems.

Pettit plans to repair her home, which has broken windows, a wall pulled away from the house by the wind and other damage.

She has already had a health department inspection.

Righthouse doesn’t think other residents will be as lucky and predicts septic tanks “will be a big problem” for many trying to rebuild.