Grand Island officials are asking a Wisconsin manufacturer to replace the central Nebraska city’s newest ambulance that has spent more time in the shop than transporting patients.

The $200,000 ambulance came right off the assembly line and went into service in 2009, The Grand Island Independent reported. But the vehicle has broken down about half a dozen times on medical calls and spent 130 days in the shop in its first year. It’s now sitting unused in a city fire station, where it’s been for the last 322 days. 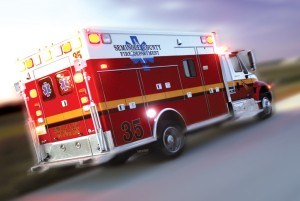 The Ford Med-Tech unit was manufactured by Oshkosh Corp. of Oshkosh, Wis. The company has made repairs, but they don’t seem to be permanent fixes, said Grand Island City Attorney Bob Sivick.

“It seems to have electrical problems and powertrain problems,” he said, adding that the city’s position is that the vehicle “probably just needs to be replaced.”

Interim Fire Chief Tim Hiemer said the city is fortunate none of the vehicle’s breakdowns happened during a life-threatening emergency medical call.

‘We’ve had the air conditioning quit on the box … we’ve had electrical issues with it, not letting it run at full power down the highway,” Hiemer said. “Even around town, the engine runs out of power – there’s a lot of smoke. We’ve had shut-down engine lights come on.”

The city has seven other ambulances, including some with more than 100,000 miles on them.

Sivick said Grand Island officials are negotiating with the manufacturer and hope to avoid filing a lawsuit. He said he hopes for a resolution by the end of the year, but that the city is prepared for a more drawn-out case.

Officials are prepared to rent an ambulance starting in early 2012 if another solution hasn’t been reached, he said.

Oshkosh Corp. was closed for business on Saturday, and officials there could not be reached for comment.