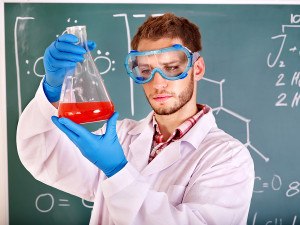 A science demonstration that went bad in a Maple Grove middle school this month has drawn attention to the fact that there’s little official oversight of experiments in classroom labs.

Four students were burned, including one seriously, when a teacher poured a small amount of methanol, or wood alcohol, into a 5-gallon plastic jug and ignited the fumes, causing a fire larger than he expected. The teacher has been put on leave while the accident is investigated.

The “whoosh bottle” demonstration, as it’s commonly known, shows up several times in one national database of lab accidents. And the National Science Teachers Association’s guidelines on lab safety discourage the use of methanol in such a way because of its volatility.

But those guidelines are little more than suggestions. And John Olson, the science specialist with the Minnesota Department of Education, said there are no state codes for classroom science demonstrations, nor any state-level auditing to make sure school districts enforce any guidelines they adopt from the science teachers association and similar groups.

“It’s pretty much voluntary at this point,” he said. “There’s not anybody who comes around and looks at instruction practices.”

Two of the four Maple Grove Junior High students were back in class last week, Osseo Area Schools spokeswoman Barbara Olson said. She said she couldn’t comment on the investigation.

The most seriously burned student, 15-year-old Dane Neuberger, was discharged from a hospital last weekend. His father declined to be interviewed.

Experts say science teachers often aren’t provided with the training and equipment they need to make demonstrations as safe as they could be.

Ken Roy, the safety consultant for the National Science Teachers Association and the director of health and safety for the public schools in Glastonbury, Conn., said he didn’t have firsthand knowledge of the Maple Grove incident, but he would ask if the students were kept a safe distance from the demonstration and behind a clear safety shield. Olson, the district spokeswoman, said a safety shield is shared among the science classrooms in the school, but wouldn’t comment on if it was used in the accident.

“You need to have that barrier, that’s absolutely critical,” Roy said, adding that school districts around the country often fail to put them in their school laboratories because of the expense. They often neglect to properly train their science teachers for the same reason, he said.

In addition to asking about training and safety shields, Roy said parents should question their school administrators about how many students are being put into each lab. Overcrowding can result in students jostling each other while handling dangerous chemicals, and make supervision difficult for teachers.

The local fire marshal will inspect buildings and the storage of chemicals. Federal Office of Safety and Health Administration rules require districts to provide employees who handle dangerous materials with the training and equipment to protect themselves.

James Kaufman, president of the nonprofit Laboratory Safety Institute, said there were no government agencies that track all injuries in laboratories. However, he has been gathering anecdotal accounts of them since 1973. His database now includes more than 5,000 incidents in middle school, high school, college and commercial labs going back to 1904.

The database contains scores of accidents that injured students in middle and high school laboratories, often from combustion demonstrations or experiments in which students combined chemicals that reacted violently and injured their hands and eyes.

It includes about a dozen examples of classroom demonstrations with fires that went out of control, including several examples of the “whoosh bottle” demonstration in particular, Kaufman said. In each case, the teacher neglected to put a shield between the demonstration and the students, he said.

Teachers also often leave the big bottle of fuel too close to the demonstration, he said, so if something goes wrong the fire gets bigger. In some accidents, he said, teachers overlooked the nearly clear alcohol flame still in the bottle when they reloaded it for a second demonstration.

Roy, the safety consultant, said a few accidents shouldn’t prevent teachers from doing the sort of flashy demonstrations that get students excited about science, but it should spur them to make those demonstrations safer.

Several With Grave Injuries After NYC Fire That Killed 19