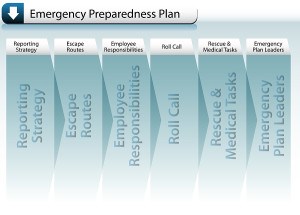 An emergency response plan drafted 10 months before the Indiana State Fair’s deadly stage collapse details how staff should handle evacuations, but it doesn’t spell out the precise scenarios that would trigger an evacuation, newly released documents indicate.

The 71-page emergency plan released Wednesday by fair officials describes more than a dozen situations, including severe weather, shootings and fires, that would prompt fair officials to activate their emergency protocols. But the exact conditions that would require the need for an evacuation are not clearly defined in the document, which leaves the final decision on evacuations up to fair officials.

“It really comes down to a matter of judgment,” fair spokeswoman Stephanie McFarland said.

Fair officials released the plan, along with numerous other documents related to the company that installed the stage rigging and an insurance policy, in response to public records requests from The Associated Press and other media outlets.

On Aug. 13, as fairgoers awaited the scheduled start of a concert by country music duo Sugarland, stage riggings collapsed as high winds swept into Indianapolis ahead of a severe storm. Four people were killed immediately, and three later died from their injuries.

Dozens of others were injured, and several face long recoveries including a young mother who remains in a coma, a 10-year-old girl who suffered a brain injury and a teenage tennis player with a spine injury.

Two days after the collapse, fair officials said fair executive director Cindy Hoye and a state trooper were headed toward the stage to order an evacuation when the rigging toppled and narrowly missed Hoye.

Kenneth J. Allen, an attorney who’s suing on behalf of some stage collapse victims, said Wednesday that the fair’s emergency response plan, which was drafted in October 2010, was shortsighted and played a role in what he called a preventable tragedy.

“This is a very foreseeable disaster. We know what the weather can be like this time of year in central Indiana. We know that those winds are sufficient to cause this kind of an episode. And they knew specifically that those winds and that storm was heading directly for the fair,” he said.

McFarland, the fair spokeswoman, declined to comment on Allen’s statements and noted that the state has hired Witt Associates, a Washington-based public safety and crisis management firm, to analyze the fair’s preparedness and response to the stage collapse.

“That question will have to be answered when Witt Associates has finished their investigation,” she said.

Allen said he was disturbed by a portion of the emergency plan that spells out how staff should handle the aftermath of a fair emergency. One section focusing on emergency communications states: “Remember the big picture! The crisis will end and you want to resume ‘business as usual’ as quickly as possible.”

He said it appeared to him to focus more on the goal of keeping fair events running than on preventing harm to fairgoers.

The fair closed for one day after the collapse, then reopened with a memorial service for the victims. State officials including Gov. Mitch Daniels stressed that the incident didn’t change the fair’s reputation as “the finest event of its kind in America.”

McFarland said the wording in the emergency plan’s communication section on what staff should or not say to fairgoers after an emergency comes from the general guidance of how to handle crisis management.

“That’s kind of the general template guidance you’ll find in a number of crisis communication textbooks and expert publications,” she said.

An insurance policy released Wednesday by fair officials insured the fair for business losses in the event that evening concerts scheduled during four days of the 17-day fair were rained out.

That policy insured the fair for up to $1.45 million if all of those concerts were rained out, but contained no provision for severe weather such as winds and lightning. It specifies that the fair could claim up to $355,000 in losses if rains had canceled the Sugarland and other concerts scheduled for Aug. 13, the day of the stage collapse.

McFarland said the precipitation that night was not enough to meet the policy’s criteria, of rainfall of a third of an inch or more.