Meteorologists flipped their lids when they found out that a summer storm—more common to temperate latitudes—had produced a lightning strike just 32 miles from the North Pole on Aug. 13, 2019. Never before had lightning been detected so close to the top of the world, and the event was duly inscribed in the Guinness Book of World Records.

This seeming fluke may not be a novelty for long. Not only did the number of Arctic lightning detections triple from 2010 to 2020, the numbers rose in tandem with global average temperatures over the same period, according to a paper published Monday in Geophysical Research Letters.

Lightning strikes (called “strokes” in the jargon) emit radio waves that bounce between the ground and the ionosphere and propagate around the world. The North Pole strike was picked up by stations as far away as Tahiti and New Zealand. Over the last decade, the number of Arctic strokes grew by “hundreds of percent,” said Robert Holzworth, professor emeritus of Earth and space sciences at the University of Washington. When he and his colleagues made the connection to temperature data, “I thought, ‘Well, this really clinches it,'” he said 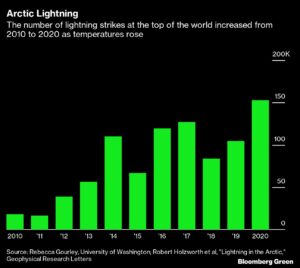 Thunderstorms may be yet another indicator of changing conditions in the Arctic, where sea ice is vanishing, permafrost is thawing, and surface temperatures are rising at twice the global rate. Holzworth was quick to point out, however, that more study is needed to explain the apparent relationship between Arctic storms and temperatures. “In different regions, in different places, there are plenty of factors involved,” he said.

So far there’s little agreement among scientists as to how climate change will affect lightning globally. Zachary Labe, a postdoctoral researcher at Colorado State University, agreed that the paper only suggests a correlation. “It does not appear to provide evidence of why they would be physically related,” he said.

But researchers elsewhere are addressing that question. A pair of recent papers from scientists at the National Center for Atmospheric Research and Paris Sciences and Letters University concludes that in a high-emissions scenario, Alaskan storms would triple this century. A second paper shows that Arctic storms and resulting events like flooding and lightning “can be analytically derived from basic physical laws.”

Holzworth offers his contribution as a data point in a rapidly shifting world: “You can make your own conclusions about it. It’s certainly increasing over this 10-year period,” he said. “If it continues on this path, there’ll be a lot more in another half a degree centigrade.”

Communities and industries operating in the high Arctic may need to increase their attention to lightning risk. Thousands of people die from lightning strikes every year. “It’s good for more people to become aware of the danger from lightning,” Holzworth said. “Every country should have lightning warning systems available.”

Can Electric Scooters Become a Safer Way to Travel?