It started with a puff of smoke, seeping slowly into the clear and sunny St. Thomas air on a mid-March afternoon. ”I went into a meeting, and when I came out, it was very on fire,” recalled Ryan Nichols, who witnessed Positive Energy, a reportedly $2.5 million yacht, go up in flames.

The now-ironically named yacht was hauled off to sea to avoid damaging other vessels, which was the case when two multimillion-dollar yachts caught fire in the Abu Dhabi Marina Yacht Club in early March, taking six boats with them. Two months earlier, a fire damaged two superyachts at a marina in Marmaris, Turkey, and another superyacht, the 95-foot Queen Anna, burned in Fethiye, Turkey.

“Almost always, when a boat catches fire and it’s in a marina, and there are numerous boats downwind from it, the fire spreads pretty rapidly,” explained Al Golden, president of the Grasonville, Md.-based International Marine Insurance Services, which insures around 14,000 boats. Cynthia Sailor from the Florida Yacht Brokers Association put it more bluntly: “One cow kicking over a candle, and the whole city goes up.” 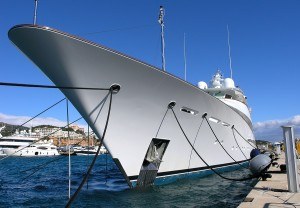 The string of yacht fires raises the question: Is there something about these multimillion-dollar investments that makes them susceptible to fire?

The short answer: No, not really, well, probably not. Experts consulted by Bloomberg agreed that despite the vessels’ length and height, the size of the boats aren’t to blame. This appears to be a conflagration of coincidence.

It’s the older and smaller boats that are typically more at risk, says Joe F. Foggia, a yacht sales broker at Northrop & Johnson in Fort Lauderdale, Fla. “As wires get older and they chafe on the metal structure, any of that kind of stuff can create a fire.” Much as in land-bound houses, electrical fires are most commonly to blame on yachts, from faulty connections to docks, wiring damage from salt water, and amateur captains trying to make repairs while out at sea. Issues in the fuel system and galley fires are also concerns.

If anything, extravagant superyachts (commonly defined as longer than 78 feet) are built to higher standards and tend to be packed to the brim with the latest in flame-resistant construction technology, including automatic steel doors to seal off the ignited area and widespread smoke detecting and fire suppression systems. They must meet rigorous requirements set by international classification societies and appease insurers who are risking multimillion-dollar policies.

What they do need more of, though, is upkeep.

“Typically, however the boat is classed, with whatever regulatory society, you have to do an annual [inspection] with them,” Foggia said. The ship’s crew, which can run several engineers deep on a superyacht, also has to maintain certificates to prove they can keep the vessel seaworthy.

This doesn’t come cheap: The U.S. Superyacht Association estimated the annual cost for operating a 180-foot yacht to be $4.75 million, or roughly an annual expense of about 10 percent of the yacht’s original cost. More space means more equipment, which means more crew, not just while the boat is in use, but also year round. In addition, every 10 years yachts require significant maintenance, according to Richard Merhige, the president of Advanced Mechanical Enterprises, a certified marine engineering firm based in Fort Lauderdale. If a superyacht is not maintained at an expert level, the sheer size and complexity of the vessel lends itself to more problems that can pose a danger the longer they are ignored.

“We once had to do an emergency repair on a yacht—it had a commitment with guests coming for a charter in Tahiti,” Merhige recalled. “We had to fly our technician halfway around the world. It was quite a logistical challenge. There are a lot of areas that are not as well equipped as Fort Lauderdale.”

A Fire in Antarctica

Another potential challenge: location. With a newer, younger wave of ultra-high-net-worth owners setting course for more unusual, remote locations—think Antarctica, not Antigua—insurance can become a challenge. Superyacht owners who don’t disclose their locations in advance could find themselves footing the bill if something goes wrong in a destination not secured in their insurance contract. (Same as if you brought your car to Mexico or Canada, for instance.)

If a yacht valued at $10 million is based in Fort Lauderdale and travels regularly around the Caribbean, Nancy Sprigg, yacht department manager of the Gowrie Group, estimates the insurance would be $75,000 to $100,000 annually, though it “could be higher, depending on where they go and how many crew they have.” If the yacht suffers a total loss at a previously approved location, the insurance firm typically foots the bill. “But on a partial loss, the deductible is usually a percent of the hull value,” Sprigg said. That’s $100,000 for the $10 million yacht.

Yacht brokers widely agreed that most yacht owners, including superyacht owners, typically purchase extensive insurance packages, including coverage on everything from vicious waves to total destruction by a giant squid. While not as rare as squid attacks, fires also aren’t the bulk of Sprigg’s concern.

“There are years we don’t have any fire claims,” she said of the Gowrie Group, where she’s dealt with around 25 such claims over the past 40 years. Collisions are the most frequent issue. “When it comes to fire, arson is an exclusion. If there is a fire on a boat, they have to do their due diligence and find out the cause of origin. It has to be investigated by the fire marshal.” That means investigators, surveyors, repairmen, marina owners, and local authorities, depending on the circumstances.

“I’ve seen a fire that occurred because of a construction worker nailing down planking on a dock,” Joe Lobley, a Maine-based marine surveyor, recalled. “One of the nails went through and hit a wire. There’s a lot of variables there.”

“Its highly unlikely that somebody would torch it just to get the insurance money,” Sailor said. “I’m sure crazier things have happened, but its not as easy as that.”