Catastrophe modeling firm AIR Worldwide estimates that total damage to residential, commercial, and agricultural properties from Super Typhoon Haiyan will range between $6.5 billion and $14.5 billion. However, because insurance penetration in the region is relatively low, AIR estimates that insured losses will range between $300 million and $700 million.

“Super Typhoon Haiyan made landfall on the southern tip of Samar Island early morning local time on November 8 as one of the most powerful tropical cyclones in modern record-keeping,” said Dr. Peter Sousounis, senior principal scientist, AIR Worldwide. “The storm maintained impressive wind speeds as it traversed the Philippines before exiting over the cooler waters of the South China Sea, where it weakened as it headed northwest.” 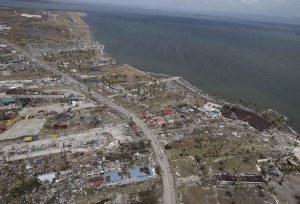 The storm created a humanitarian disaster in the Philippines as it swept away small villages in its path, left over 2,000 people dead, and displaced more than 650,000 people.

Dr. Sousounis noted, “The islands of Leyte, Samar, and northern Cebu are among the worst affected areas. Tacloban City, the capital and biggest city (population of 220,000) of Leyte province was particularly hard hit as storm surge depths as high as 4 meters destroyed every coastal home and left many inland neighborhoods inundated with floodwaters.”

Many inland residential and commercial buildings were also destroyed, and the tiny peninsula where the Tacloban airport was once located was leveled, leaving only the runway. Nearly every tree in the city was either flattened or snapped in half. These fallen trees and other debris have blocked roads both in and around the city. Guiuan, a municipality located very close to where the typhoon made landfall, was also left in ruins.

A crucial component of providing an accurate insured loss estimate is ascertaining the storm’s exact strength at landfall. However, this is a challenging task, particularly for Haiyan, given that no known anemometers in the vicinity of landfall survived the storm.

To produce loss estimates for Haiyan, AIR used track information from the Japan Meteorological Agency to model several different scenarios that reflect a range of radius of maximum wind values. The range in the modeled insured losses reflects uncertainty in the meteorological parameters associated with this event. For the insured loss estimation, there is additional uncertainty in the take-up rates (insurance penetration) for the Philippines.

Loss estimates do not reflect: