AccuWeather.com reports temperatures this Spring will end up near to above average across most of eastern, northern and Atlantic Canada, while much of central and western Canada will be dominated by near or cooler-than-normal conditions. 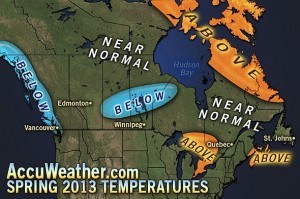 This temperature pattern across the country (cooler West/warmer East/North) will have some similarities to last year’s Spring, but it will not be quite as warm overall. The Spring of 2012 was the 9th warmest on record for Canada.

Expect a more active storm track across the eastern Prairies and into northern Ontario, which will result in a wetter Spring and additional late-season snowfall across this region and extending up into central Quebec. This primary storm track will also lead to a higher number of warm spells getting up into southern and central Ontario, which includes the Windsor to Toronto corridor.

The overall threat for strong to severe thunderstorms will be higher than normal across southern Ontario during May and into June.

Despite the wetness, the risk for widespread river flooding across southern Manitoba (including Winnipeg) will be about average for this time of year.

Drier weather will persist across much of Alberta this Spring, which includes the cities of Edmonton and Calgary.

Spring ski conditions should be good to excellent across western Canada.

Wetter conditions will return to much of the West Coast, especially north of Vancouver and Victoria, BC after a rather dry start to the year.

The cooler-than-normal waters of the eastern Pacific will no doubt have a greater cooling influence along the coastal regions of BC into the summer thanks in part to the the negative phase of the Pacific Decadal Oscillation.

The Spring of 2013 will be fairly typical of most springs from the Ottawa region through southern Quebec (Montreal and Quebec City) and into northern New Brunswick as temperatures and precipitation will end up close to average.

A higher than normal amount of Atlantic storms will threaten eastern Newfoundland, including St. John’s, while narrowly missing the Maritimes.

Confidence remains high that temperatures will continue to average warmer than normal throughout much of far northern and northeastern Canada this Spring.