A recent crime spike, including a surge of shootings, is giving some New Yorkers another reason to leave.

That’s especially true for newer arrivals, who’ve only known a city where the murder rate has plunged over the past 30 years, boosting real estate prices and fueling economic development in what became the safest big city in the U.S.

“I never felt unsafe until this past month,” said Kat Tanita, a 31-year-old Instagram influencer who left Soho in July to live with family in Connecticut after a theft from a storage room in her building. “The rise in crime is what made me decide to move for my own safety.”

The exodus from New York started in March when the city locked down, with the absences most notable in wealthier neighborhoods where residents fled for second homes or took advantage of low mortgage rates to relocate to the suburbs.

While it’s hard to know how many people have left for good, as of early July close to 20% of Manhattan’s population had decamped, according to Arpit Gupta, a professor at New York University who has studied the city’s population movements.

The city, of course, is still far safer than it was in decades past, but increased violence and paranoia that New York is slipping back toward the bad old days is pushing more people out. Gill Chowdhury, a broker at Warburg Realty, said he’s working with four sellers who are leaving because of crime.

Rachel Shehy, 25, moved to New York five years ago with $300 in her pocket and found work as a nanny. In March, she relocated along with a family to East Hampton to ride out the pandemic. Now, she’s back in her Upper West Side apartment and wants to leave the city.

Residents in the neighborhood have complained about a growing homeless population and drug use. Shehy, who says she was recently chased by a man with a knife, is applying for jobs outside the city, including back in the Hamptons, and will move in with family in Ohio if that doesn’t work.

“I’m getting the hell out,” she said.

There’s also been a “real slow down” in demand for apartments in gentrifying Brooklyn neighborhoods, including Flatbush and Crown Heights, that were hot just a few months ago but are now close to increased violence, according to Levi Gold, principal broker at Urban Pads. 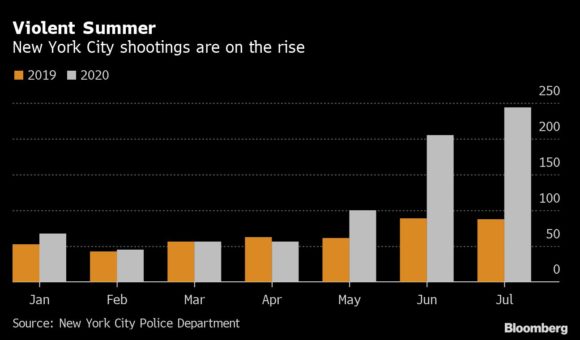 Many of the people who live in the areas where shootings have surged don’t have the option to leave. Poorer neighborhoods have also been hit hard by coronavirus and resulting job losses. In that sense, the pandemic has revealed a “new strain of inequality,” according to a study by the New School’s Center for New York City Affairs.

In East Harlem, it’s the recent arrivals in gentrified buildings who are departing, said Raquel Plaza, 26, who grew up in the neighborhood. She’s seen fewer police in the area and suspects it’s because they are angry about the Black Lives Matter protests against police brutality.

In the 75th Precinct, which covers East New York, Brooklyn, there have been 58 shootings this year, up from 35 a year earlier, and 21 murders, compared with eight in 2019.

“Fireworks for two months that didn’t let us sleep, shootings every single night — it’s a war zone,” said Elizabeth Figueroa, 58, who moved to East New York about 40 years ago and doesn’t expect to leave.

For New Yorkers who lived through the 1980s and 1990s, the current crime rates aren’t terribly alarming. Still, the trends are enough to keep some longtime residents away for the time being, especially when Broadway is dark, the subway is a source of anxiety and restaurants and bars are mostly off limits.

Kip Cosson, who moved to New York in 1986 and recently relocated upstate, plans to return to his rent-stabilized apartment in the West Village when the “time is right.”

But the graphic artist and children’s author, who sells his T-shirts and books at street fairs that are currently shut down, isn’t in a rush.

“These are desperate and crazy times in the world,” he said. “I’m just glad I’m away from New York City.”

–With assistance from Natalie Wong.

About the photo: Police ballistic markers stand at a crime scene in Brooklyn where a one year old child was shot and killed on July 13, 2020 in New York City.