The accidental drowning death of a Leacock Township teen Saturday was tragic, but unfortunately, not unique.

Fifteen-year-old Jonas King was operating a skid loader when it overturned into a manure pit, trapping the boy under the heavy machinery.

Three years ago, a 4-year-old boy died after falling into a manure pit on an Earl Township farm. 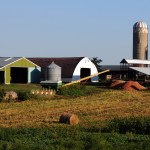 “Farming is a risky occupation, next to mining, there are a lot of hazards, and manure pits are one of them,” said Kay Moyer, who does farm safety education through the Lancaster office of the Penn State Cooperative Extension program.

Statewide, there were 37 fatal farm incidents recorded last year. In six of those incidents the victims were children.

Two of those incidents involved horses, while another last year was a manure pit drowning.

While the 2013 farm fatalities represented the highest overall number in recent years, the number of child deaths was actually down.

In 2012, there were seven people age 19 and younger killed in farming-related incidents in Pennsylvania, according to data compiled by Penn State University’s Agriculture and Biological Engineering department.

In addition to manure pits, falling through hay holes, from lofts in a barn; falling from silos; being injured by heavy machines and large animals are frequent causes of farm injury and death, said Sue Lackmann, manager of Lancaster General Health’s community health & wellness program and coordinator for Safe Kids program for Lancaster County.

The programs are moved to different rural locations each year, Lackmann said.

“We’ve been pretty much all across the county,” she said.

This year, with representation of the trauma units of Lancaster General and Penn State Hershey Medical Center, families moved among several displays.

Topics included the hazards of farm machinery, including skid loaders and tractors; the dangers of confined spaces, such as silos; large animals; and pedestrian safety along roads, Lackmann said.

A 911 simulator was particularly aimed at children, who may be unfamiliar with talking on the phone, she said.

The programs are arranged in consultation with the Amish Safety Committee. Presentations address recent accidents which have occurred and how to prevent them.

The programs are geared to Plain Sect Amish and Mennonite farmers, although some “English” do attend, she said.

Lackmann said the family focus means parents are there with their children, sometimes for consecutive years. Hopefully, children will remind parents what they have heard, she said.

“It’s a good reminder for everyone to come here and hear this information,” she said.

The education done by Moyer, of the Penn State Extension program, is held in Plain schools.

Along with drowning in manure pits, Moyer said it is easy to be overcome by the gas emitted from the pits. Gas within a silo presents a similar hazard, she said.

Falls from hay lofts, grain wagons, and particularly tractors are a common cause of injury and death, the annual Penn State reports show.

In 2012, a 2-year-old Earl Township girl drowned after falling into a feed tub filled with water.

“We have a lot of water in homes and farms. Even the bathroom tub can be a danger,” Moyer said.