A judge cited disabled Superstorm Sandy victims stranded in high-rise towers to illustrate his conclusion that New York City violated laws designed to protect the disabled – about 11 percent of the city’s more than 8 million residents – as it created evacuation plans for emergencies ranging from storms to terrorist attacks.

U.S. District Judge Jesse Furman issued his written opinion Thursday, saying the city violated the American’s with Disabilities Act and the New York City Human Rights Law despite emergency efforts that he sometimes praised. He said the city’s emergency preparedness plans fail to ensure that people with disabilities can evacuate before or during an emergency and fail to provide accessible shelters. 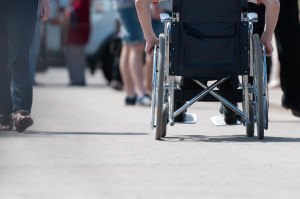 Julia Pinover, the senior staff attorney for Disability Rights Advocates who argued the case, said the “ramifications nationwide are huge” if New York City sets the standard for helping the disabled during emergencies and inspires “municipalities country-wide to think through the sufficiency of their own plans.”

In a statement, Michael A. Cardozo, who heads the city’s law office, said lawyers were “continuing to review this decision and assess our next steps.”

He added: “While we are disappointed with the court’s conclusions, we are gratified it recognized that the city’s extensive planning is impressive, and the efforts and valor of those responding to emergencies have been ‘extraordinary.’ Planning for the needs of people with disabilities has always been and remains a priority for the city.”

Furman questioned the city’s planning priorities in his 119-page ruling, noting that the Special Needs Coordinator within the city’s Office of Emergency Management has no staff and is on the lowest rung of the office’s organizational chart. And he said there was no evidence that the police or fire departments employ anyone to ensure the departments’ emergency plans and policies accommodate the disabled.

He wrote that evacuation plans intended to apply to all residents “plainly – and unlawfully – fail to take into account the special needs of people with disabilities.”

“Hurricane Sandy dramatically demonstrated the consequences of this failure. Plaintiffs provided substantial evidence that people with disabilities … remained trapped in high-rise buildings for days after the storm,” he said.

He highlighted several areas of concern, saying the city’s evacuation plans do not meet the needs of disabled people in high-rise buildings and its shelters are not required to be sufficiently accessible to the disabled. He also said the city has no plan for canvassing or otherwise ensuring that people with disabilities are able to access emergency city services after a disaster.

However, he also noted that the city took several actions in response to Superstorm Sandy that are not included in its emergency plans, including canvassing buildings after a prolonged power outage and providing a sign language interpreter at the mayor’s news conferences.

Furman’s ruling came in a class action lawsuit brought on behalf of a population that the city estimates comprises about 890,000 of its more than 8 million residents. He said his ruling was limited to the question of liability, and he will decide remedies separately unless the parties reach a settlement.

His ruling came after he reviewed 25,000 pages of exhibits, more than 20 city emergency plans, hundreds of pages of legal papers from the U.S. Department of Justice and the testimony of at least 35 witnesses during a six-day bench trial in March.

“This mountain of evidence and argument confirms that planning for, and responding to, emergencies and disasters is a Herculean task, and that, in many – perhaps most – respects, the city has done an outstanding job,” Furman said. “But it also reveals that while the city’s emergency preparedness program adequately accommodates the needs of people with disabilities in some respects, it fails to do so in others.”

Tania Morales, a 26-year-old plaintiff who has used a wheelchair for more than a decade, said the ruling was “such a relief.” She said she got to a shelter during Hurricane Irene in 2011 only to find a locked gate surrounding the wheelchair entrance. “I was terrified and forced to return home in the storm.”

Plaintiff Gregory Bell, who is blind and has diabetes, said the ruling will help people like himself with chronic health conditions.

“Knowing which shelters provide refrigeration for life-sustaining medications and diabetic meals is the difference between life and death for people with diabetes,” he said.