When the call comes in, as it did on a frigid April morning, rescue crews from Coast Guard Sector Delaware Bay are expected to be ready and under way within a half-hour.

About 8:30 a.m., a passing vessel reported a sinking off Cape May. Three fishermen were in the water. The low air temperature was 30 degrees, a record for that day.

“It’s scary, and you realize you have to know your job 100 percent,” Petty Officer James Pappas told The Press of Atlantic City about his eight years with the Coast Guard. “You have people’s lives in your hands. You’re always aware of that.” 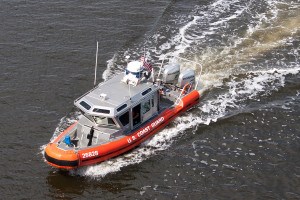 While en route, the team received a report that all three fishermen were out of the water. Once there, they realized that was a miscommunication. One person off another boat had jumped in to help, and he was the third person seen leaving the water.

The two fishermen suffered from hypothermia and were vomiting saltwater. Pappas and another crew member hugged them, wrapped in blankets, to try to keep them warm during the ride back.

“They were both so traumatized and in shock that they were falling sleep,” he said. “We didn’t want them to fall asleep, so we kept talking to them and keeping them awake.”

With their friend still in the water, Pappas rattled off a barrage of questions to keep the fishermen lucid and to gather information to help the search: What’s your name? What’s your birthday? What’s your favorite color? What was your buddy wearing?

The two fishermen returned safely. Despite an extensive search, the third was never found.

Radio and GPS technology have greatly increased the information available to rescuers. Faster, sturdier boats can weather nearly any storm. And improved safety equipment has increased survival at sea. But the job is full of inherent dangers, and every call has potential for unexpected turns.

“You have to go out, but you don’t have to come back” was and, to some extent, still is the motto of the U.S. Coast Guard. For nearly a century, recruits have known this fact of life for the men and women who respond to disaster at sea.

Attributed to a Cape Hatteras station keeper cajoling his men to launch a wooden rescue boat into rough surf, the sentiment was even codified in the regulations of both the Coast Guard and its predecessor, the U.S. Lifesaving Service.

“(A keeper) will not desist from his efforts until by actual trial the impossibility of effecting a rescue is demonstrated,” reads an 1899 regulation book.

“That very much is not the case anymore,” said John Copp, a Barnegat Light-based petty officer and student of Coast Guard history. “The big focus is on risk assessment now: determining when risk is acceptable and when it’s not.”

All of this has improved safety. During the Great Atlantic Hurricane of 1944, 59 guardsmen were killed while performing their duties. None were lost during Hurricane Sandy, despite continuous rescue operations.

A series of fatal accidents in the 1990s, culminating in a 1997 incident in Washington in which three rescue boat crew members died during a call, brought increased attention to the risks.

“Unfortunately, it takes a death to catalyze changes to safety or equipment,” Copp said. “The Coast Guard, or really any other agency, learns from its mistakes.”

That re-examination led in 1999 to the Green-Amber-Red (GAR) system.

As the watchstander gathers information about the emergency, Pappas and his team members use GAR to assess their risk.

Each member – usually four – assigns a score in categories that include event complexity, planning and supervision. The scores are tallied and, if the total puts the operation into “red” or “high-risk” territory, the team makes changes to reduce the risk.

“I’m very new at my job,” said Pappas, 28, who recently passed the engineering exam to serve on the 47-foot Motor Life Boat, or MLB, Cape May Station’s newest search-and-rescue vessel. “So maybe I’m not 100 percent confident. We can grab another person, maybe one of the people who gave me my board (exam).”

The more experienced engineer would observe Pappas’ performance and, if a problem should arise, step in to help. While such a public vote of confidence could potentially bruise egos, Pappas said, they’ve worked together so long that doesn’t happen.

As cumbersome as the process seems to an outsider, Pappas said, the assessment takes a matter of minutes, often while the crew is running out to the dock and preparing the rescue boat.

Within five minutes of a call, the crew usually knows where they are going and what to expect.

A century ago, lifesaving stations dotted the New Jersey coast at about 8-mile intervals, with crew members standing lookout or walking foot patrols on the beach for distressed vessels. They often ventured out into the surf with minimal information about the situation.

Today, a watchstander monitors banks of computer screens showing GPS, radar and radio activity. When a call comes in, he or she gathers as much information as possible. Where is it? How many people are involved? Are they wearing life vests? Are there injuries? How long since the incident?

The watchstander relays that information to the crew, similar to a 911 dispatcher, as district command in Philadelphia determines what resources to dispatch. In April, crews from Station Cape May, Aids to Navigation Team Cape May and a helicopter crew from Coast Guard Air Station Atlantic City were all sent to the site of the distress call.

This integrated system, named Rescue 21, was phased into operations around the Delaware Bay starting in 2003 and later expanded to the rest of the country.

Lt. Scott Farr, who commands Station Cape May, said its many features include immediate playback of radio calls and the ability to triangulate those calls among towers, even if the caller’s radio cuts out.

“If something comes up on a mic for a couple seconds, the system will say it’s in this direction, with this bearing,” said Farr, 32, originally of Virginia Beach, Va. “If they move or the boat drifts, it’ll create a larger search area, but this allows us to better pinpoint their location.”

“‘He’s in the Delaware Bay’ is so much better than ‘I have no idea where that (call) came from,”‘ he said.

But despite advances in procedure and technology, the fundamentals haven’t changed.

“You can’t go shake the hand of a lifesaver in 1880, but in a way you can,” said Copp, a 22-year-old from Seattle whose fascination with the Coast Guard led him to enlist. “The way we’ve been taught has been passed down and built upon.”

Today’s rescuers undergo training just as rigorous as some of their 19th century counterparts.

After making it through eight weeks of boot camp – basic training takes place in Cape May – Pappas said his team constantly reviews procedure. Refresher courses happen every six months, and officers quiz each other as they pass in the halls:

“What’s the compression-breath rate for an adult?”

In transit, the coxswain directs the boat with the assistance of a navigator, while the engineer monitors the boat systems and responds to any electrical or mechanical problems. A fourth crewman, typically the least experienced, assists the others.

Meanwhile, district office and Cape May station are in constant contact with the rescue vessel and any other assets, such as SeaTow, deployed to the scene. The watchstander talks to those on scene, gathering information and keeping them calm.

“Just telling them we’re on our way to get them hopefully makes them sit better until we get on scene,” Farr said.

Responders rely on a combination of verbal information over the radio and data from Rescue 21 during the search.

“A lot of times, we don’t know what the actual conditions are until we get on scene,” Farr said. “Bad information could mean flooding is worse than what we were told, so the guys need to adapt the best they can.”

Just as diaries and log books from the 1800s outline to daily routines of lifesavers, from inventorying supplies to repainting the wooden boats, the modern rescue effort often begins long before the first call.

Pappas likens the morning inspection to spending an hour scrutinizing the family car before backing out of the driveway. Every morning. For life.

“When lives are on the line, you need to be sure,” he said. “You don’t want problems to come up when you’re out there, under way.”

That’s a far cry from the man-powered lifeboats of the distant past, but Copp said rescuers constantly have the dangers in mind.

“As long as people are going out on the water, there’s going to be some variable level of risk,” he said. “Technology has curbed that to some degree, but the risk will always be there.”