He who dies with the most toys wins … unless trapped under all those toys during a fire when rescue workers can’t get to you.

The compulsive hoarding of both animals and material goods has become a “grave problem in Bucks County,” complicating fire and medical rescues and leading to some deaths, investigators said Monday.

Emergency personnel, medical professionals and social workers met for a compulsive-hoarding symposium at Delaware Valley College in Doylestown. Hundreds gathered in DelVal’s student center for the training session led by Gail Steketee, dean and professor at the Boston University School of Social Work.

The conference began with a question.

“How many of you have dealt with a person with a serious case of hoarding?” Steketee asked the group. 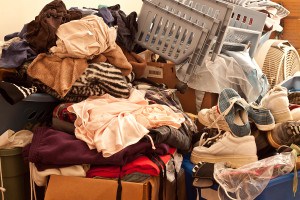 Nearly every hand in the hall went up.

Bucks County Fire Marshal Nick Rafferty described cases in which homeowners remained trapped in their homes during a blaze.

“It took an extended period of time just to find the deceased bodies because everything fell on top of them,” Rafferty said. The fire marshal declined to identify the victims.

In November 2010, firefighters responded to a similar case in Tinicum and struggled to get through the house because of hoarding. One woman was later found dead among the rubble.

More recently, investigators said they responded to a house fire in Plumstead only to discover books, paperwork and other items piled up even in the homeowner’s shower, said Mark Kramer, assistant fire marshal for the county.

“Neighbors said they knew something was wrong because the woman would always sit outside even in winter,” said Kramer. “There was no place left in her house for her to sit.”

Clinical studies suggest “one pack rat in every 50 people” in the U.S., exceeding the prevalence of some other more commonly understood conditions such as obsessive compulsive disorder, Steketee said.

Most compulsive hoarders begin to exhibit symptoms between ages 15 and 20, Steketee added. The inability to part with both animals and objects generally grows into a crippling obsession by the time hoarders reach middle age.

“We know people who have filled one house, bought another, started to fill that house, and bought a third,” said Steketee. “So, these are people who have money and can just move from home to home.”

Some studied hoarders believed “things are more reliable than people” and that throwing away items means one’s whole life is “a waste.” Hoarders might also be uncomfortable storing items in cabinets because they would then be out of view.

Hoarders also appear to have more pronounced visual skills and an ability to “see tremendous uses for something that others cannot see,” according to Steketee.

Studied cases of animal hoarding found subjects who believed animals were more important than people. In some cases, animals and pets were found to be the most stable figures in the subject’s early life as their parents quarreled, Steketee said.

Sadly, it is often easier to investigate cases of animal abuse than human abuse as family members begin hoarding, experts said. Animal advocacy groups such as the Bucks County SPCA are often the first to gain access to a home when hoarding is suspected.

More than 100 animals, including chickens and snakes, were removed from a Bedminster home in April.

Last summer, police in Hatboro arrested two women following the discovery of 36 cats in a house where the floors had reportedly buckled under the weight of trash. SPCA workers entered the site in Hazmat suits and described feces piled atop shelves and dressers and in every corner of the home.

More than 50 cats, nearly all Persians and Himalayans, were removed from the home of a Lower Makefield woman in May 2010.

And, nearly four dozen Yorkshire terriers were discovered in 2009 in the basement of a home in Upper Makefield.

Bucks County Commissioner Diane Marseglia adopted one of the rescued terriers, named him “Joey” and brought him to Monday’s hoarding conference.

“He was one of eight Yorkie babies that was living in a bird cage,” she said. “There wasn’t any food, and I can tell you we had to bathe him two or three times just to get the stench out of him.”

Bucks County launched a hoarding task force in 2010 following a number of other incidents. But it remains a challenge to address or even study the problem, officials said.

“We live in a country where you have a right to live as you want,” Rafferty said. “We have to permit you even to jeopardize your own life.”