This post is part of a series sponsored by The Detection Group.

Gravity is not your friend when it comes to leaking water. Water always seeks the lowest point in nature, and in commercial structures,” notes Laurie Conner, President & CEO of The Detection Group®.

In a commercial, multi-story building, you can ‘chase’ the origin of a leak for hundreds of feet across, then up and down any number of 20,000 square foot floorplates before you locate the leak source. You’ll find spaces in your building you never knew existed, all the while the leak continues its drip, drip, drip waiting to become a flood. And your worst friend ever, mold, is sinking its ugly tentacles into drywall, carpets, cabinets, and ceiling tiles. Insurance companies are acutely aware of the issue as they pay out on over $10 billion annually in water damage claims – more than fire and theft combined. 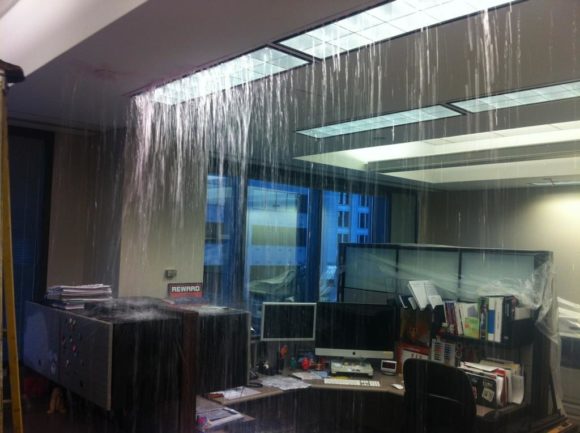 Every facility should have a Trident wireless water leak detection system. Water leaks are a universal problem that almost every property manager or building owner has experienced. Interior water damage can result anywhere water flows in a building, including plumbing; boilers; water tanks; HVAC systems; sprinklers; fire risers: toilets; restroom and kitchen sinks; ice makers and refrigerators – anything that has a water supply.

Three weeks after the installation of a Trident wireless water leak detection system in a 38-story office building in San Francisco, the building engineer called to tell us he received an alert at 5:30pm on a Friday afternoon. A toilet was overflowing in a 17th floor restroom, which was not equipped with a floor drain. The engineer believed the water would have migrated down to the lobby before anyone discovered the overflow. By preventing one disaster, the Trident system paid for itself many times over.

Be prepared. If you have experienced a catastrophic water event you know how disastrous and expensive it can be. If you haven’t, odds are you will. There is no reason you should have to with The Detection Group’s Trident wireless, remote sensing technology that can be installed in any size or age building.

Learn more about The Detection Group’s Trident System at thedetectiongroup.com