This is a tale of two roof claims after a major hail storm in Decatur, Texas, that were handled the same way, but should have been handled differently. The carrier should have paid out less and could have avoided future losses, but didn’t. In total, the carrier believes its combined ratio could be improved up to one point through loss adjusting expense (LAE) savings if it had had the right information about these and similar claims.

The first claim to come in — let’s call it the Alpha house claim — was the second roof claim in a five-year period for the property, both in response to significant wind and hail weather.

The second claim — let’s call it the Beta house claim — was also the second roof claim in a five-year period due to confirmed weather.

The severity on the prior claims was similar, although the severity of the current claim on the Alpha house was quite a bit less than that on the Beta house.

There was one other big difference between Alpha and Beta: the homeowner in Alpha had repaired the roof properly after the first claim. In contrast, the homeowner in Beta had stapled some shingles to the roof to cover the initial damage, pocketed the rest of the claims check, and waited for the next weather event to worry about actually replacing what seemed like a still-functional roof.

Unfortunately, the carrier did not know that the Beta house was any different from the Alpha house — it appeared to the adjuster that the storm hit Beta more strongly than Alpha, not that Beta’s roof had been improperly repaired. The carrier cut checks to Alpha and Beta and should have worried about the future shape of Beta’s roof … but didn’t.

There’s a great way to see if proper repairs were done after a significant claim: building permits. Major repair work — work that affects the soundness of a structure-almost always requires a permit, and most of the time, contractors and homeowners do pull permits for major repair work. That doesn’t mean that there aren’t parts of the country where repairs are usually done by Uncle Jim, a trip to the lumber store, and bottle of Jack Daniels, but generally speaking, building permits are a great way to follow up on significant repairs. 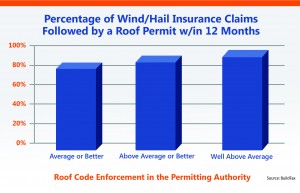 Where the local building department enforces the roof code properly — meaning that the local authorities issue fines if unauthorized/unpermitted work is going on — an overwhelming number of wind and hail claims are followed by roof permits.

Similar statistics hold with other repairs that are meaningful to the health and soundness of the structure. While specifics vary from state to state and jurisdiction to jurisdiction, in general, any type of construction work that could result in an unsound structure (from foundation issues to plumbing issues) requires a permit.

Enforcement of building codes does vary by jurisdiction and based upon type of work. For example, a jurisdiction on the coast might enforce the roof code very strictly, but might be more lax with respect to the electrical code, where electricians doing small residential projects are not fined significant amounts of money if found to be working without a permit.

The best part about getting building permit information as a follow-up to a prior claim is that it isn’t just interesting information. It’s usable insight.

As an adjuster, there are two significant actions that you can take based upon this knowledge: if this is actual cash value (ACV) coverage as increasingly, roof coverage is becoming, knowing that the roof was not properly repaired will make a huge different in ACV calculations. And you have proof, so the claims experience is backed up with defendable data.

In more and more claim workflows, there is a growing communication channel between claims and underwriting. Having access to defendable property condition intelligence allows a claims adjuster to provide important feedback to their underwriting counterparts that in turn could have a significant impact on policy renewals.

Even if a carrier doesn’t retrieve building permit information for claims follow-up, simply telling homeowners repairing a claim that they should get a permit because that will provide a record of the proper repair being done, is a great way to increase the chance that the work will be done properly.

It also helps give warning to homeowners that the carrier may choose to certify that the home is in proper condition through building permits in the future.

Mechanics of Getting Permits

Building permits are usually issued by the local municipality, or in the case of an unincorporated area, by the county. Since they are produced by a government entity, they are required to be made available to the public under open records laws, and many building departments provide permit histories free of charge. Some even provide them over the Internet, retrievable on demand.

There are a number of aggregators of building permits as well, including BuildFax, which can provide permit histories on demand for a small fee.

No matter how you choose to retrieve building permits, there is no doubt that they add a significant level of actionable intelligence to policy and claims management, and it is only a matter of time before they are used as a matter of course.

Emison is the founder and chief technology officer of BuildFax. He frequently speaks on cloud architecture. BuildFax collects and organizes construction records on millions of U.S. properties.

Walmart Amps Up Its Virus Response for Workers